Forget jumping the shark. Now, there’s shooting the elephant. And no, I’m not the first person to make that joke in light of the internet’s latest viral video sensation — GoDaddy CEO Bob Parsons shooting an innocent (depending on who you ask), adorable (depending on who you ask) elephant in Zimbabwe. As if their commercials weren’t offensive enough, this is probably the dumbest thing to come out of GoDaddy since they approved their navigation UI.

Not only did Parsons commit the cardinal sin of someone in the public eye – allowing a video to be shot of himself doing something controversial – but he then promoted the video on his own blog. Now, I know GoDaddy’s corporate self-image is somewhere between Nascar and those old Man Show sketches with the busty, bouncing bimbos (or so their commercials would have me believe) but even so, this stunt seems a little ill conceived to say the least. When your business relies on recruiting the broadest swath of people possible to use your services, creating  something that so clearly crosses the line of bad taste (depending on who you ask) isn’t the brightest move. Posting it on the internet, for everyone to see and contextualize for themselves is even worse. Animal cruelty aside, this smacks of a man who was either hunting for cheap headlines or just doesn’t care what the web thinks of him – or of his company by extension. And that seems to me like bad news for GoDaddy either way.

Full disclosure: I own some domains through GoDaddy and although their site is the UI equivalent of a really bad migraine, and I find their advertising to be in worst taste than Bai Ling’s entire wardrobe put together, I have always found their services to be reasonably priced and well executed and their phone support to be top notch. Which makes this whole thing even worse to watch.

One of the many differences my new job has brought about is the sudden addition of a commute to my life. Yes, for the past three years, I was lucky enough to live a mere five minute walk away from my job. Go ahead fellow Angelenos, hate me. I would.

But, now as is probably karmically right, I have a daily commute from Hollywood to Marina Del Rey. I thought I’d hate it, but I’m actually finding that I really love having the time to wake up properly in the morning and decompress after work in the evenings. For 30-40 minutes (yeah, I have an awesome super secret route I’m not sharing) every day, I get to be alone with me, myself,  and KPCC.

Of course, of all the weeks to start listening to the news on a daily basis, this has been a particularly depressing one. Earthquakes, tsunamis, nuclear meltdowns, military strikes, Charlie Sheen’s speaking tour. It’s like we’re only a few plagues shy of a John Cusack disaster movie. And all attempts to deal via bad jokes aside, it’s frankly, a little terrifying. 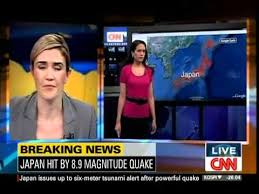 And, I think that being alone with the stories, sitting in my car, without the distraction of some scrolling chyron carrying the latest Lindsay Lohan news across the bottom of the CNN screen has really made the sad tales of the people affected by the past week hit me even harder.

Right now, people around the world are dealing with destruction and uncertainty I can’t even imagine. It’s hard not to just get overwhelmed, turn it all off and go back to watching the Dancing With The Stars premiere.

After all, I can donate to the Red Cross or put together a care package for the Libyan refugees, but it’s hard to even know where to start when it comes to processing the scope and scale of all of the stuff happening around the world right now.

Which brings me back to KPCC, and to the amazing work they and NPR have been doing to bring the stories of the people surviving all the craziness around the world to my radio every day during my drive to and from work. Those stories might be scary, but they’re important.

Sharing them helps us share, in some small way, the burden of the people who experienced them. At least in my opinion. And, making those stories mean something — whether it’s a reminder to organize my own emergency preparedness plan or a sense of gratefulness for the relative privilege of sitting warm and safe in LA traffic — well, that’s the only way I can think of to start processing the craziness of the past week. Or at least, start to.

If you feel the same way, please join me in donating to KPCC and keeping that amazing storytelling coming. And while you’re at it, why not throw in a little something for the Red Cross too.

After close to three wonderful years at Ranker, it is very bittersweet for me to announce that next week will be my last week with the company, as I move on to a new job as Associate Product Manager at Cooking.com.

I was one of the first employees hired at Ranker, and I am very proud to say I’ve helped build it from the ground up into the powerful platform that it is today. Our Ranker team is full of people who are as passionate as they are capable, and what we’ve done with the site to date is truly a testament to the team’s vision and hard work. I’ve cherished the opportunity to work with them, and to grow as a person and product manager because of it. I cannot say enough how much I believe in the potential of Ranker, both as a company and as a product, and the decision to leave has been very hard because of that.

But, at the end of the day, the chance to work with a product that dovetails so nicely with my personal passion for food and cooking was one I couldn’t pass up. And, the opportunity to further my growth as a product manager under Cooking.com’s Sarah Cohen, whose career and credentials I so greatly admire, clinched it for me.

Next Monday marks the start of my last week at Ranker, and I’ve already begun transferring some of my roles and responsibilities to the rest of the team. If you have any inquiries, questions or comments about aspects of Ranker I may have worked with you on before, please feel free to email me and I’ll direct you to the right person to speak to now. The strength of the remaining team is just one of the many reasons I have full confidence that Ranker is going to continue its massive growth, and I’m excited to see how the product evolves going forward.

And, while I’m sad to leave, I’m also eagerly looking forward to assuming my new role at Cooking.com and joining another fantastic team there.  It’s been a great three years at Ranker, and I’m looking forward to cooking up an equally great future at my new job. (Sorry, I couldn’t resist).

Jezebel just published this article — Girls Underestimate Their Own Intelligence, which cites a classic study that says smart girls are more likely than their male counterparts to give up when trying to solve a tough problem.

Apparently, “Researchers have uncovered the reason for this difference in how difficulty is interpreted, and it is simply this: More often than not, Bright Girls believe that their abilities are innate and unchangeable, while bright boys believe that they can develop ability through effort and practice. How do girls and boys develop these different views? Most likely, it has to do with the kinds of feedback we get from parents and teachers as young children. Girls, who develop self-control earlier and are better able to follow instructions, are often praised for their “goodness.” When we do well in school, we are told that we are “so smart,” “so clever, ” or “such a good student.” This kind of praise implies that traits like smartness, cleverness and goodness are qualities you either have or you don’t. Boys, on the other hand, are a handful. Just trying to get boys to sit still and pay attention is a real challenge for any parent or teacher. As a result, boys are given a lot more feedback that emphasizes effort (e.g., “If you would just pay attention you could learn this,” “If you would just try a little harder you could get it right.”) The net result: When learning something new is truly difficult, girls take it as sign that they aren’t “good” and “smart,” and boys take it as a sign to pay attention and try harder.”

Looking back at my own history, I’ve always said I feel like the biggest failing of the modern education system isn’t gender-based differentiation, it’s skills-based segmentation. From a young age, us kids were grouped — the good english kids separated from the slower readers and the bad math kids kept apart from the kids who’d already mastered their multiplication tables. From those early groups, permanent self-images were formed. I always thought of myself as the kind of kid who would just never get math. It didn’t even occur to me that the subject I struggled with so much in fourth grade would end up forming the foundation of a lot of work I happily do with algorithms and analytics now. And even when a kind chemistry teacher (thanks Dr. D!) took a special interest in fanning the bunson burner flame of a newly-discovered passion for science in tenth grade, I still assumed my innate inability to ‘get’ math meant science just wasn’t in the cards for me either. Who would have thunk I’d be working on semantic web software today?

Now, after reading about that study, I can see how those feelings could be traced back to the way I, as a girl, was taught to see myself vis a vis my scholastic aptitudes and ambitions. Of course, without a Delorean to travel back in time with, there’s no way to say that for sure. But the logic sure does add up. Or, as Dr. D would have me say, there seems to be plenty of evidence in my own experience to support the hypothesis this article posits. Of course, if chemistry class taught me anything, it’s that changing the variables of the experiment can significantly alter the outcome. Which is why I hope that studies like this will soon be relegated to the realm of history class, not current events.

Seek and ye shall find